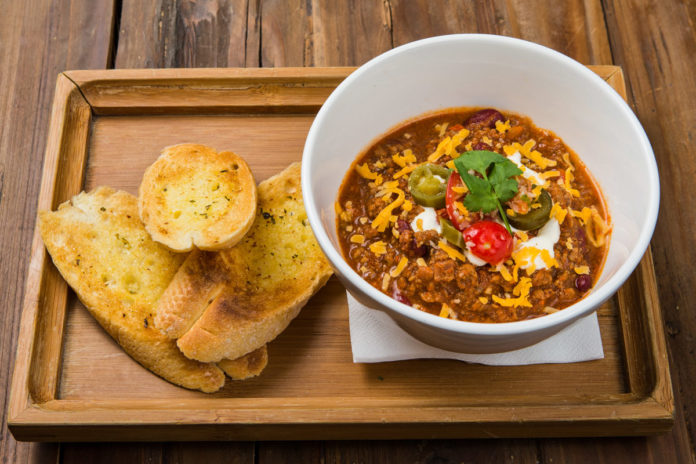 One more comfort food: Bowls of Chili in Shanghai

A bowl of piping hot chili is one of the most delicious ways to take the edge off the cold weather. We’ve hit up some of the city’s best known places for a bowl of this spicy Texas-style stew. Here’s what we liked best in town.

Pistolera is a three-time chili champion in Shanghai. They clinched it with a recipe by Chef Jorge “Tabasco” Leonardo Guerrero. It’s a huge, meaty bowl of ground beef, ground pork and beef chuck cubes spiced with a mix of Serrano, Guajillo and Poblano peppers (RMB80). It’s also available ladeled over their burrito (RMB110) or nachos (RMB70/small, RMB100/large).

While it’s too cold for Mayita’s rooftop terrace, now is the perfect time to get cozy inside with a belly warming serving of black bean and roasted pork chili (RMB65). Layers of flavor come from a long list of herbs, blackened spices, and Ancho and Guajillo peppers. It’s also a two-time People’s Choice winner at the Shanghai Chili Cook Off.

It should come as no surprise that this diner does a solid chili (RMB35/small, RMB45/large). It’s all about balance. Owner Charles Zeng mixes two types of beef (ground and chunks) for texture and five different peppers for heat and depth of flavor. It’s great in a cup, on a burger, over fries, or on one of their hotdogs (RMB10 as a topping).

Al’s Diner has a variety of comfort foods to please nearly everyone. Their chili was created by one of Shanghai’s most well-known chefs, Sean Jorgensen (now at Highline). What sets this chili (RMB45) apart is that it has bacon bits mixed in with the ground beef. It’s also one of the spiciest versions we’ve tried. While on the menu at both Al’s locations, go to the Xiangyang Lu location and stock up on baked goods at Al’s Baking Co. on the way out.

What goes better with chili than beer? Boxing Cat Brewery has an award-winning red hot chili (RMB40) that will warm you from the inside out. They mix ground beef, pork and sausage with kidney beans and tomatoes. We suggest pairing it with the light Helles lager, and adding tortilla chips or garlic bread as a side.

Eight years in the making, Urban Soup Kitchen now has six locations throughout the city. They’ve just updated the menu to include hearty stew section. One of these is a hearty chili (RMB58) made with Australian beef, kidney beans and garbanzo beans, with added flavor from Guinness stout. It is served with a rice combo of Jasmine rice, oats, black rice and quino

Munchies has been around long enough to have earned the title of Shanghai’s original diner. They serve classic American comfort food, from burritos to burgers. They do a Cincinnati-style beef chili (RMB46), which has a heavy emphasis on sweeter spices such as allspice, cinnamon and cloves. The sauce has an orange sheen from beef fat and is often served atop spaghetti, also known as a “two way” (RMB33). Extra toppings also available, including cheddar cheese, raw onion and kidney beans.

Vegetarians and vegans need comfort too and Happy Buddha helps fill that void with a range of tasty western options. They serve a veggie-laden chili (RMB38) that even meat-eaters will enjoy. The secret is that the vegetables (carrot, bell pepper, celery, onion, garlic) are slowly caramelized in their vegan butter before being simmered in their house-made vegetable stock of quinoa, dry and fresh chili and herbs. Get the chili (RMB20) as a side with sweet potato chips (RMB11) for dipping

The Chinese concept of yin and yang in food