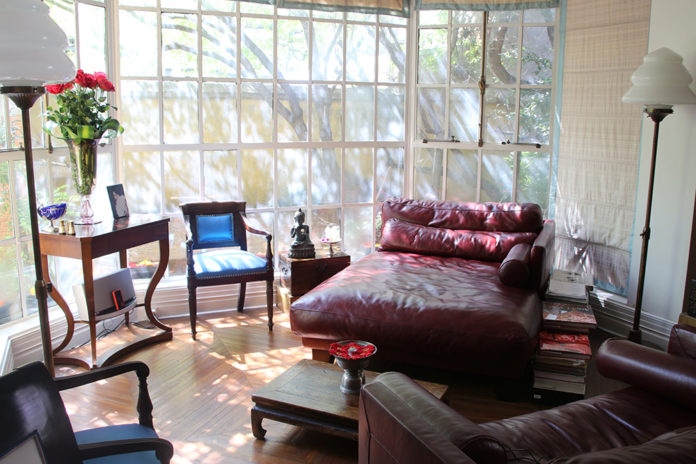 When I first moved to Shanghai, my husband and I were shown the usual round of modern service apartments, and were quite pleased with ourselves for finding a spacious, comfortable apartment for a fraction of what we had been paying in Hong Kong. We flew up to Shanghai for the weekend to look at apartments, and were done looking in four hours. In the back of my mind there was a notion that more interesting housing existed in Shanghai. I had vague visions of elegant garden homes, but I knew the rents for those homes wouldn’t conform to our newly instituted austerity measures. While my husband was still gainfully employed, I had recently left corporate law practice to join the ranks of the working poor.

However, as people with every kind of budget started inviting us over to their apartments and houses, we felt the envy start welling up in us, accompanied by self-loathing. Why were we living in a characterless box sheltered from the “real China?when our friends were living in every imaginable form of pre-liberation housing, ranging from the extravagant former dwellings of enemies of the people to garret apartments that we imagined must have been the meeting place for revolutionaries? How could we deprive ourselves of this aspect of the Shanghai experience?

This state of affairs dragged on for a while, with us ashamed to repay the kindness of our hosts by inviting them over to our nondescript, uninteresting excuse for a home. Then as fate would have it NATO bombed the Chinese embassy in Belgrade. Suddenly most of my projects, which depended on good will and cooperation between the United States and China, ground to a halt. At the same time my husband decide to leave his job to start his own company. And we thought we were poor before?So I launched into our second apartment search in Shanghai in six months. The first time I had a housing allowance, and just wanted to find something quickly. This time I had some time on my hands, but very little money. I was looking for “a find?

I started by diving into the world of local property agents. I would walk into offices with nothing but one dusty desk and a few pieces of paper pinned up, wake up whoever was sleeping on the desk, and demand to see any good old properties the agent had. We were open to leasing or buying and as a naturally curious individual, I refused to commit to a price. I wanted to see what was available out there, even if I probably couldn’t afford it.

I quickly discovered these real estate agents had no sense for what I thought was “good? I visited cavernous abandoned houses, or dark and dank houses inhabited by numerous families who hated one another and tried to block each other out with makeshift walls and locked doors. Although the houses were in wretched condition and the owners were unwilling to invest any money in them, they wanted to sell the houses for hundreds of thousands of U.S. dollars.

For a more reasonable price, there were apartments where the toilet was in the kitchen and apartments that consisted of unconnected rooms and the use of a common kitchen and bathroom. The real estate agents were particularly proud of old houses that had been completely rebuilt and were as bland as the villas in Hongqiao, or apartments that had been refurbished through the installation of hot pink carpeting, florescent lights and mirrored walls.

Once in a while, though, they would show me my vision of “good? hardwood floors, stylish original fixtures, big French windows. I would love it, and the property agents just couldn’t see why. For some reason all the apartments I loved were on the market to be sold, and only the “use rights?were for sale. Not a particularly good investment for a foreigner who expects to leave in a few years.

Finally I decided to try some more conventional property agents who specialize in leasing old places to expatriates. Shanghaimaison.com, One eventually came through for us. For a reasonable price, we found a six-room longtang house (a lane house, or townhouse) that we thought only needed some paint and a bit of work on the kitchens and bathrooms. The only catch was we had to pay for the renovations ourselves. As the renovations proceeded we discovered more and more problems that had to be fixed with the electricity, plumbing, etc. Soon what we had thought was an attractive townhouse had turned into a rubble-filled construction site complete with a team of resident migrant laborers, hanging laundry and piles of fish bones.

Then there was the issue of the nightsoil trucks (choufen che). As the renovations neared completion it was explained to me that we couldn’t tile the common courtyard because massive trucks have to drive in occasionally to suck out all the sewage from our entire row of houses, which accumulates underground. The tiles would block access to the sewage and in any case would probably just crumble until the weight of the trucks. Taking this unwelcome information about the plumbing in stride, I asked what the schedule was for the sewage truck, so I could be sure not to be grilling food in the courtyard when the truck arrives. “Well, it would not be wise for it to come on a set schedule, say, once a month. Because what if it’s a light month, the truck comes and the vat isn’t quite full? How wasteful. Instead, the truck only comes when someone in our row notices the fen rising out of the ground and into their apartment via the drainage pipes. But don’t worry, your apartment is slightly higher than the others, so someone else will notice it first.

Such challenges aside, we watched our workers like hawks and our reward was a house which has hopefully been restored to its 1920s glory, except with better electricity and plumbing. We’ve been living in our lane house for a couple of months now, still waiting for signs of the feces truck.

We’re a constant source of amusement for our neighbors, who are mostly retired cadres who spend the day in the lane gossiping, playing cards and now watching us. The day I moved in the old lady from neighborhood watch explained to me that sanitary napkins can not be flushed down the toilet. I guess I’m the only pre-menopausal woman in the lane and she didn’t want me screwing up the plumbing for everyone else. I no longer worry about experiencing the “real China?

Not sure that my experience would be of assistance to anyone who is pursuing his or her own “find? I spoke with a Shanghai architecture expert to put it all in perspective. She told me that all the long-time Shanghai residents she knows, by which she means people who’ve lived here for 15 years (!) or longer, all live in longtang houses. Back in the lanes there are a myriad of housing possibilities. There are some detached garden homes, but more common are rows of attached houses. She lives in an alley where at the front of the lane the houses are eight across, then further back six across, four across, and finally the luxurious ones at the back are only two across. It was designed as a social experiment to house people of different economic levels in one lane.

According to her, while some people do hear about places from word of mouth, most do end up finding places through a property agent. She pointed me towards some noteworthy lanes for living or exploring, and some stunningly successful renovation projects. At her suggestion, I saw a beautiful house on Tai’an Lu. Although I’d seen a number of renovated garden homes, I think this one was the best because the expatriate tenants were actively involved in the renovation project, and their taste is impeccable.

I extracted some extremely useful tips on the pitfalls of renting an old place in Shanghai. Always ask a lot of questions about how the renovations were done, and double check that the electricity and plumbing have been upgraded to an acceptable standard. Watch out for leaky ceilings and walls that are not sufficiently waterproofed. From a legal point of view, the landlord must have the appropriate rental permit in order to enter into a binding lease agreement. To verify the landlord has a rental permit that enables him/her to rent to foreigners, you should ask to the see the ownership certificate for the property. If the landlord has a green colored ownership certificate it means the property can be rented to anyone.

If the landlord only has a red colored ownership certificate, watch out, the property cannot legally be rented to a foreigner. The lease agreement should then be registered with the local police office so that the tenant is officially registered to live in the neighborhood.

The hunt for an old place can be complicated, and there are ongoing hassles which you won’t find living in a service apartment. But the process of finding an old place was one of those experiences that gives me a new perspective on Shanghai and its possibilities.

Look out for these longtang:
Shanghai has an infinite number of longtang and each person is entitled to a favorite, but below are a few interesting ones I came across that are worth a look:

Xinhua Lu, Lane 211
Just a short walk from the Holiday Inn Crowne Plaza, this U-shaped lane winds around and rejoins Xinhua Lu at No. 329. The lane is filled with quirky old garden homes, but what is truly special are the well-manicured hedges and lawns and the generous width of the lanes.

Jianguo Xi Lu, Lane 506
Ignore the sign at the front of the lane banning all non-residents from the lane, and walk into a clean, spacious lane lined with stucco walls on either side. The walls are decorated with hanging plants and Chinese calligraphy.

Tai’an Lu, Lane 120
Right in the middle of the squawking fowl at Tai’an Market (which can be approached from either Huashan Lu or Xingguo Lu) you can turn into this lane and all of a sudden you’ve entered into a quiet European neighborhood. At last count, four of the houses in this lane have been renovated by enterprising individuals for occupation by foreigners.

Huaihai Lu, Lane 987
Near the Parkson’s and the Shaanxi Lu intersection, this lane is a fine example of crowded, grungy, lane life. Hidden amidst all the craziness is a row of houses which was renovated in the early 90s in a Sino-French cultural cooperation project. These houses have been taken over by foreigners, but they are living only a few feet away from the “real?Shanghai in this lane.

There are many other interesting lanes along Huaihai Lu, particularly the stretch west of the consulate. Other streets worth exploring are Yongjia Lu, Taiyuan Lu and Anting Lu.

You can find more types of housing in Shanghai on the Shanghai Housing website that is dedicated to helping expats in Shanghai find a new home.

The Best Serviced Apartments in Shanghai for expats

Buying a apartment in Shanghai guide